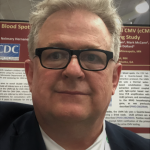 Considerable interest has been engendered nationally for developing and implementing testing of newborn infants for congenital infection with cytomegalovirus (CMV). Currently, newborn screening in Minnesota consists of three simple tests: blood spot screening, hearing screening, and pulse oximetry screening. In Minnesota, the newborn dried blood spot tests over 60 disorders, examining for a variety of metabolic, genetic, and immunological disorders. However, the sum total of all abnormal screening tests still represents fewer babies annually than the total number of cases of congenital CMV. In Minnesota, it is estimated that 300-350 infants are born annually with congenital CMV. Up to 15 percent of these babies are at risk for long-term neurodevelopmental disorders and sensorineural hearing loss, which may not be present at birth but may develop by age 3. Indeed, congenital CMV is the most common infectious disease in Minnesota responsible for long-term disabilities.

So, why is universal congenital CMV screening not performed in the United States? One concern has been the lack of sensitivity of testing for CMV in the newborn blood spot. In studies performed in the early 2000s, the sensitivity of such testing, using PCR testing for CMV DNA, was no better than ~30 percent. However, in a recent publication in JAMA: Pediatrics, I demonstrated a substantially enhanced sensitivity of blood spot testing, between 85-90 percent, in a newborn nursery study performed at five Twin Cities hospitals. This substantial improvement in sensitivity creates an opportunity to establish a universal testing program in Minnesota. Using the dried blood spot allows state health departments to tap into established infrastructure using this resource  to potentially add CMV PCR to the testing panel and precludes the need to collect additional swabs and samples, such as urine and saliva, in most newborns.

Testing for congenital CMV infection in the newborn period identifies infants who can benefit from careful neurodevelopmental evaluation, in particular careful audiological evaluation – since most CMV-associated hearing loss occurs beyond the immediate newborn period. Depending upon the results of diagnostic evaluation, some infants may benefit from antiviral therapy. I presented a summary of the clinical characteristics of the Minnesota universal congenital CMV screening cohort in an oral poster symposium in May at the annual Pediatric Academic Societies meeting. Long-term developmental studies are described at the UMN congenital CMV resource web site (cmv.umn.edu). Many state health departments are considering the addition of congenital CMV testing to their screening panels, and the Department of Health and Human Services is considering addition of CMV to the Recommended Universal Screening Panel. Increased knowledge and awareness of congenital CMV, particularly among young women of child-bearing age, can play a role in prevention, until such time that a vaccine is licensed.

The UMN will be a testing site for a phase III efficacy study for an investigational CMV vaccine for young women. The study will being in late 2021. Those interested in learning more about the study can email cmv@umn.edu.