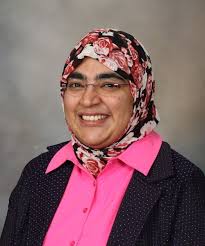 What drew you to pediatrics?

I knew early on that I was interested in primary care because I really enjoyed getting to know patients in the clinic as a medical student, but I was torn between wanting to work with children and the elderly. When I look back, I see that I kept choosing projects that focused on children, which I think subconsciously kept bringing me back to pediatrics. Then there was that gut feeling doing peds as my final third-year rotation that cemented my passion for working with and for children.

I work exclusively in outpatient primary care pediatrics within a large academic institution, so most days I am doing some combination of seeing patients and teaching. Often that means having a medical student with me in the morning or supervising our resident pediatric clinic in the afternoon. I also serve as director of the resident continuity clinic which has given me the opportunity to create and implement a curriculum over the last several years. It has also taught me that the one constant I can count on in medical education is change!

You are involved with the AAP Council on Communications and Media (COCM) as the chairperson. Can you tell me about your work with the council?

I joined the council a little over a decade ago as the council itself had recently been formed as a combination of two committees, one that examined the effects of media on children and the other which served to prepare pediatricians to work with the media to accurately translate important science about children’s health to the public. I’ve been interested in children’s media exposure and its effects since residency. That interest hit me right in the face during my first year of practice when a four-year-old patient, after seeing a television commercial, told his dad that he was supposed to ask his doctor (me!) about Levitra.

Now, I feel that I have a foot in both worlds as we talk to parents about how to manage media when so many people are on lockdown due to the novel coronavirus, but I also use social media to inform, amplify, and advocate. As part of COCM’s Executive Board, I was the lead author and editor of Pedialink’s first-ever online CME media education module, which was also approved for MOC Part 2 credit. Before I became chair of COCM, I served as both Program and Education chairs, which involved creating programming for the AAP National Conference and Exhibition every year. I also chaired the 2016 Peds 21 pre-conference that focused on media. I’m also thrilled to be part of the 2020 Peds 21 program committee which will focus on racism, bias and health inequities for children of color.

What prompted you to go “back to school” to complete a Master’s in Public Administration through the Commonwealth Fund Fellowship in Minority Health Policy at Harvard University?

Becoming a grad student in my 40’s was not something I had planned on, but my long-standing professional and personal interest in working with immigrant communities coupled with the need to better understand the system outside the clinic prompted me to do a deep dive into policy. The last few years have been a crash course in how important it is to have informed leaders and elected officials who make laws that ultimately affect the kids I see in clinic. I can work hard to advocate on a one-to-one basis multiple times every day, but if the system is flawed, even this important work becomes Sisyphean. We need to do more work upstream to restructure broken systems that too often leave out some of our most vulnerable populations.

What is something your colleagues might be surprised to learn about you?

In sixth grade, I held the class record for upper body strength in the Presidential Physical Fitness Test and now I can barely do one pushup. I had my moment of triumph. It was awesome.

What’s the funniest thing a child has said to you recently?

We’ve been doing more telemedicine lately, which gave me a chance to pick a fun background and I’ve had a number of kids ask if that’s Baby Yoda behind me. It is!