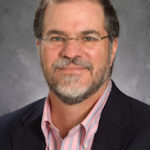 For me, it was the aftermath of the February shootings at Marjory Stoneman Douglas High School in Parkland, FL. It is not that I wasn’t concerned before by all the other shootings and hadn’t written many letters to the editor and participated in countless discussions on the topic of reducing gun violence. But three things happened after Parkland that changed me. The first was reading a powerful piece by a pediatrician who lives and practices near Parkland and whom I know from residency. The next was seeing how the students from Parkland and elsewhere took this on as their own responsibility to fix – without waiting any longer for adults to solve it. Finally, it was the March 2018 “March for Our Lives” rally at the Capital in St.Paul that I participated in with 20,000 others. There, we heard the despair of students and their call for change. All of these have combined for me to say enough is enough. It is time to try and make changes to reduce gun violence.

In this article, I will present practical ways that you can try to reduce gun violence. The suggestions will be grouped together in three areas: convincing yourself why this is important, what you can do in your exam room with your patients and their families, and what you can do to help make changes at a community level. 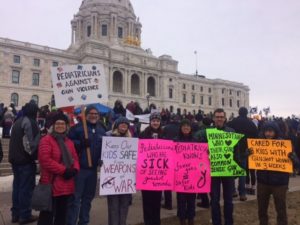 If you are going to become a leader in reducing gun violence, you need to not only understand the magnitude of the problem, but also feel motivated to make a change. Each of us have only so many hours in the day and we all have to decide which projects are important to us. Here are a few statistics that may help you to understand why reducing gun violence is imperative.

Death by gun violence in the U.S. is now considered a public health crisis. We need to start thinking about and devoting the same energy to preventing injuries and death by gun violence as we do for other public health issues, such as motor vehicle accidents, smoking and cancer. It is also not just a pediatric issue – but rather an issue that affects all of us, regardless of age. And if you need one more reason to get involved, it is the simple statement we have heard over and over from our young people since Parkland: No one else is doing it. If we, all of us, don’t do something – nothing will change.

Once you convince yourself that you need to do something, you then need to know what you can do as a clinician in your exam room with your patient and their family. I struggled for years to know what to say, to whom to say it and when to say it. We all are concerned with offending our patients/families by asking inappropriate questions. We may be concerned that our patients may wonder why I am asking them about guns in their home – do I ask everyone? Is it because of their skin color or ethnicity? For me, it has been important to make it clear to families that I am asking everyone about having guns or weapons in their home and I am doing it so that if there are guns or weapons, we can talk about keeping everyone safe in the home. As a pediatrician, I am primarily asking the parents of my patients, but for older children, I also ask them if there are weapons in the home. If you care for adults, you would obviously direct your questions to that individual. If a person responds that they do have guns in their home, I will then ask if they are kept locked up, unloaded and with the ammunition stored separately. In addition, if there are individuals in the house with any type of mental health problems, including but not limited to history of suicide, I will discuss how it is even more important not to have guns in the house in these situations.

In my practice, I have decided not to ask about guns and weapons in the home at each visit, but rather at certain well child visits (e.g. 2 years old as children are more able to get into things at home, again at 5 years old as they are in school and then again at 12 yrs old as they enter adolescence). I also bring it up if I am dealing with a patient with developmental issues or mental health issues or if there is a history of substance abuse or domestic violence, since individuals with these risk factors might be more at risk of causing harm – to themselves or others, if they had access to a gun. Finally, I make it a point to discuss this with my patients and their families myself – not simply to have my nurse ask about it. This way, I believe I impart additional importance to this topic.

Last, I want to give you ideas of what you can do on a community level. The first is to participate in marches and rallies to stop gun violence. I have made a conscious decision not to make this an issue about guns, but rather, about gun violence. For me, the issue is not whether a person owns a gun, but rather are they being safe with it to hopefully prevent gun violence. I am also aware that as a society, we need to work at changing the culture which sees guns as a solution to too many problems. Next, write letters and op/ed pieces to your local newspapers. Don’t get discouraged if they aren’t printed. Keep sending them and hopefully the next one will. Remember, your voice as a clinician is strong and respected. Use it to make a point. Next, talk to your state and national legislators to find out how they stand on the issue of reducing gun violence. Let them know that you believe this to be a high priority. If you find they aren’t supportive of legislation to reduce gun violence – consider voting for other candidates that will. And lastly, be willing to financially support organizations that are working on a national level to reduce gun violence (e.g. Brady Campaign to Prevent Gun Violence, Americans for Responsible Solutions, Everytown For Gun Safety).

While reducing gun violence in our society may seem to be an overwhelming project to accomplish, there are ways we can join together to help make it happen. Connect with the professional medical organizations that you belong to and get out and join with your community when there are rallies to attend. We can make a difference.